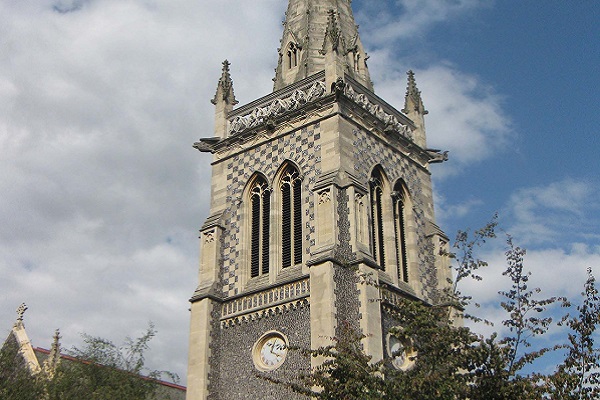 St Mary-le-Tower is both a parish church with a thriving congregation of people of all ages,
and the Civic Church for the town of Ipswich.

Its fascinating history and its location in the heart of the town draws large numbers of visitors.
Our congregation is drawn from all around the Ipswich area, coming from a wide variety of backgrounds and religious perspectives, ranging from Evangelicalism through to Anglo- Catholicism.

The first church, endowed with 26 acres and probably built of wood, flourished in the time of Edward the Confessor as recorded in the Domesday Book of 1086.

Holy Trinity Priory was founded in about 1177 and for 360 years its black-habited Augustinian secular canons served the Tower church and parish.

By 29 June 1200, when King John’s Charter was received in the churchyard, the second Romanesque church shown on the Borough Seal had replaced the former Saxon building. St Mary le Tower has been the town’s civic church ever since.
Turstan, a canon in 1220, is the first incumbent whose name we know.

In 1325 the Merchant Guild of Corpus Christ was founded. Its processions, plays and feasts were held on the Thursday after Trinity Sunday. Miracle play props were stored in the church. Each Maundy Thursday the feet of 13 poor men were washed in the chancel. The Chaplain of the Guild taught the sons of members, probably in the south aisle: this was the beginning of the town grammar school.

By 1450, the Romanesque church needed rebuilding and William Gowty’s will of 1448 left ‘calyon stone for all the new church being built in the churchyard of the same church’. The north and south nave aisles of this third church were built then.